Is a creative resume right for your industry? 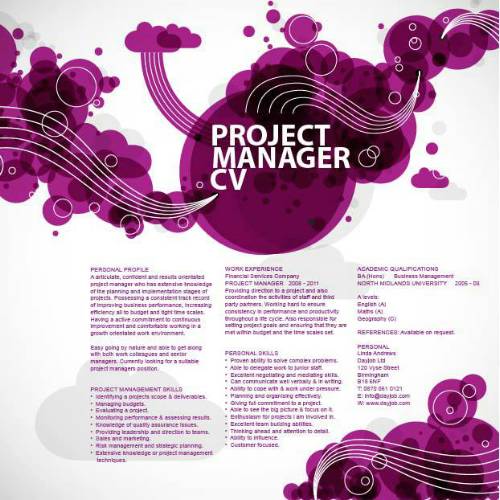 Is a creative resume right for your industry?

Our standard advice here at Resume Target has always been to get creative with your content and not with your format. The reasoning behind this advice is that creative resumes are often difficult to navigate and comprehend, and therefore ineffective.

Another reason is the low rate of acceptability. Hiring Managers are expecting a standard word document or PDF format for each resume they receive. If you catch them off guard with a creative document, you may catch their attention and get called for an interview. On the other side of that argument, the Hiring Manager may frown upon your inability to follow the regular standards for resumes and toss yours aside.

Now with all of that being said… for those of you who constantly avoid the idea of normalcy and regular standards, there are some industries where a creative resume will have a higher chance of resonating with an employer than others.

You can imagine that creative resumes would often be a good idea for those in creative industries, but you may also be surprised at some of the industries we’ve listed below.

This has to be one of the most obvious ones in the bunch. Time and time again we’ve seen creative resumes go viral for web designers who created a Facebook page, Google search result, or Amazon product page as a way to catch a Hiring Manager’s attention at one of those companies.

A friendly warning – the originality of this concept has also been lost. After the first few viral resumes, I’m sure Facebook is no longer overly impressed when someone creates a profile page as their resume.

Your skill-set requires creativity with images, content and graphics in order to catch the attention of prospective consumers. You can easily transition those skills to be used to catch a Hiring Manager’s attention with your creative resume. This is a great way to show your skills and abilities, rather than telling the Hiring Manager how fantastic you are.

Additionally – include samples of your previous work as images in the document as well. Though your content will be telling the Hiring Manager all about the advertising campaigns you launched, the graphics/images will show them exactly what you’re referring to. This easily boosts your credibility.

This is another obvious choice. Graphic designers take content, wording and images and turn them into visually appealing and interesting boards, signs and images. Why not do the same with your resume? This is a field where Hiring Managers are expecting that creativity. Even if you submit a regular two-page resume, they still expect to see that cool logo you made for yourself.

Why? – A creative resume is so much more important on a graphic designer’s resume because every other applicant will already have the same skills as you do. You have to prove how much better you are by delivering a piece of your work as your application.

I generally group sales, business and finance together, but when it comes to creativity… sales is the only one that fits. Though our first recommendation for a sales resume would be to remain within the regular standards, this also depends on your personality.

Who? – We’ve all come across that incredibly tenacious and ambitious salesperson that is noticeably passionate about their job. This is the type of salesperson that can use a creative resume to their benefit. This is especially true for salespeople who are selling creative products within the arts industries.

Another not-so-creative professional would be a programmer. A creative resume in this case would not be one that is visually artistic, but instead one that demonstrates the programmer’s technical proficiency.

How? – A programmer could easily create a resume that mimics that visual display of code. This would be a fun way to catch a Hiring Manager’s attention. However, fair warning here as well. There are employers in the tech industry that would not favour this style of resume.

As we continue to move away from the visually creative resumes, another field that comes to mind is public relations. Sticking with our theme of show don’t tell,  a Public Relations Representative could craft a resume as though it was a press release.

Content – This is a great example of using the resume content to get creative, instead of the format itself. The press release could state the current position opening at the company, and how this particular representative would make a great fit.

In the ever changing and highly competitive world of news and media, journalists are now required to also be skilled in photography, social media, layout and design. Therefore a great idea would be to incorporate those skills into a resume format.

Easy Steps – The easiest way to incorporate skills regarding social media and photography would be to link to stories where you included photographs and maintained high social media interaction. Another idea is to format the resume like the front page of a newspaper, and make your skills the front page story.

Just because you didn’t see your profession, field or industry listed above in our short round-up, that doesn’t mean that a creative resume will fail miserably in your job search (though that is always a possibility). If this is a tactic you really want to try, go for it! Just remember to keep the content easy-to-read so that your message is not lost in your concept.

There are a few industries where we definitely recommend against a creative resume. These are industries that either have strict standards for their resume submissions, or those that do not include creativity in their work mandate whatsoever.

When a creative resume will hurt you more than help you:

Teaching – The academic industry has very strict requirements for what they expect each application to entail, and veering from these standards will result in your resume being tossed away rather than reviewed.

Oil & Gas/Construction – In the ever-thriving oil and gas industry, Hiring Managers are not interested in creative resumes. These are hands-on practical professions that require trade skills. That’s all they want to know.

Law – In the law industry (whether it be paralegals or lawyers), it is always best to keep your resume professional. This is a no-nonsense industry, and a colourful and graphic resume will not say much about your professionalism.

Nikki Gill is the content editor at Resume Target and blogs at ResumeTarget.com. Nikki is a graduate of the Ryerson School of Journalism and has written resumes for job seekers at all career levels from students to C-level executives.

Job seekers place a huge importance on making themselves stand out, and it has... read more

Professional resumes: Are they worth the money or just a waste of time?

Let’s face it. Nobody is a writer. Not even award-winning novelists could publish their... read more

Using Colour in your Resume: Yay or Nay?

If a hiring manager clicks to open a resume and the document is neon... read more

The top 4 programs for creating resumes

The first roadblock that many job seekers encounter is where and how to get... read more

What objective statements really mean, and why they don’t work

Once upon a time, in a high school classroom about ten years ago, we... read more

10 ways to maximize your job search strategy on LinkedIn

If you want to find a job in this tough job market, there’s no... read more

Will creativity get you the job?

What steps do you take to make yourself stand out from the masses? It’s clear,... read more